This article looks at the best worm composter (or worm farm) with reviews to help you choose the right worm farm for your needs. Our reviews are based on our own experience, hundreds of Amazon reviews, other blogs and numerous Youtube videos.

The Worm Factory 360 is a stackable worm bin made from recycled plastic. Plastic is not very breathable, but the upside is it will help to keep the moisture in.

The worm farm kit comes with some bedding material including coconut coir, mineral dust and pumice. As well as some tools including a scraper, rake, thermometer, pH meter and moisture meter. The worm farm kit also comes with instructional DVD, a manual and a 70 page book called “The Complete Guide to Vermicomposting With the Worm Factory 360″. As a bonus, the lid has a sticker on top which provides some useful worm farming tips and advice.

The worm farm includes 4 vertically stacked trays, allowing you to have more than one working tray at a time. It’s easy to get started; you just fill the bottom tray with bedding, food waste, and worms. As your worm colony grows, you can just add more trays. The worms will migrate upwards to feed. The number of trays are expandable up to 8. If trays are too full, the weight compresses the worm castings in the lower trays which can restrict airflow.

There’s a detachable worm ladder for the base of the worm composter. This helps your worms climb back up into the bottom tray in case they get down into the base.

The spigot makes it easy drain and collect worm farm leachate or worm tea. But it can sometimes get clogged with worm castings.

The legs are slightly angled outwards and a little wider which helps to make the worm farm more stable.

The lid double acts as a stand to hold the trays when you need to harvest the worm castings. The bottom of the trays will be covered in compost. This will help to make the process a bit cleaner; especially if your worm composter is kept indoors.

The VermiHut 5-Tray is high on the best worm composter list if you’re looking for a more affordable option. It has an aesthetic design and is made from recycled plastic. It comes with a lid, five stacking trays, a liquid collection tray, and a pedestal base. The trays can expanded up to 7 trays so there’s plenty of room for your worms to grow.

The bottom tray sits on top of a plastic board or cloth filter which helps to stop your worms from falling into the liquid collection tray.

The worm bin is compact which makes it suitable for smaller backyards, courtyards and balconies etc… It is straightforward to assemble. And like other stackable worm farms, it is very easy to use and maintain.

The lid is shaped like a roof with air holes on the side for greater ventilation. This is a big plus. The downside is the air holes are fairly large which makes harder to keep pests out and enables your worms to escape. Note that worms may try to escape if the conditions in the worm bin are unsuitable to live in (e.g. temperature, pH level, moisture etc…).

The worm farm comes with an instruction manual and coconut coir bedding block to help you get started.

The Urbalive Indoor worm farm is one of the best indoor worm composters available. It is a more expensive worm composter with a sleek and modern design. It looks more like chic furniture, so it wont look out of place inside.

The worm farm is made from recycled polyethylene and it comes with 2 stackable trays.

A step-by-step instruction guide is provided to help you get started. The worm farm is super easy to setup; most of it is already assembled except the legs. There’s a spigot on the bottom rather than on the side which is unusual. In order to collect worm farm leachate or worm tea, you’ll need to slide a container underneath which is somewhat annoying.

The lid is little tricky to close as well. And be mindful that even indoor worm farms will attract fruit flies and bugs. The cloth handles of the screen between the base and the bottom tray are known to degrade.

The Urbalive Indoor worm farm is an excellent choice if you’re looking for a worm farm that can be used indoors. 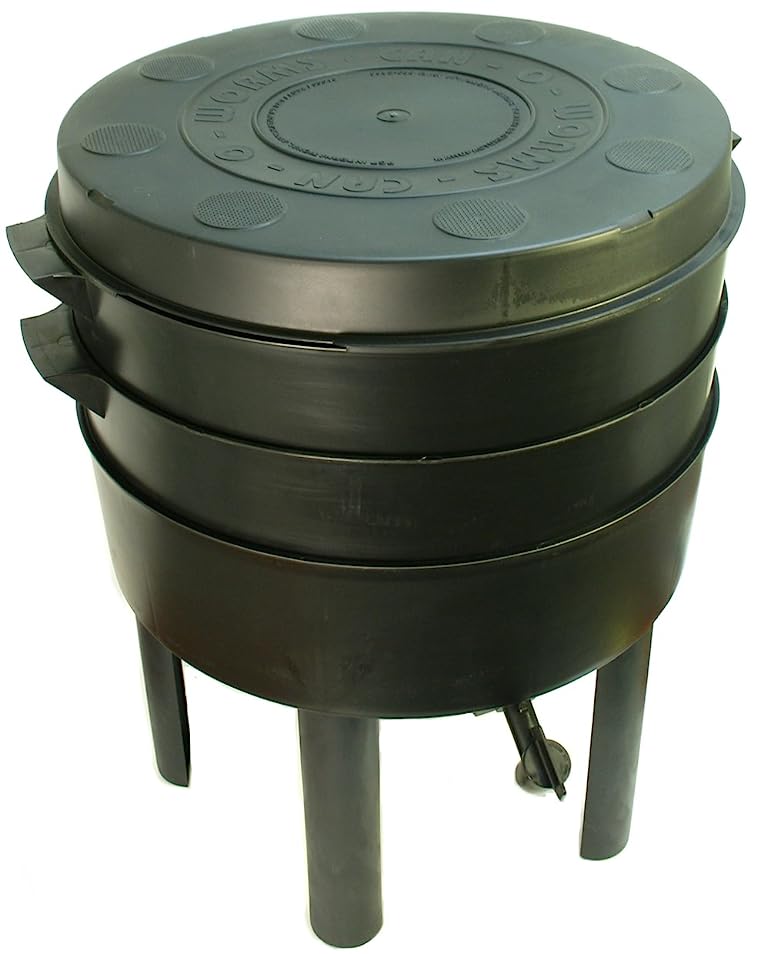 The worm farm is very easy to setup, with no screws needed. A coconut coir bedding block is included to help you get started.

The round shape of the worm farm is unique and appealing at first. But it takes up more space compared to a square design. In addition to this, whenever you cover up food with newspaper or cardboard, you will never be able to tear it perfectly to fit along the rounded sides.

The lid has plenty of small air holes for ventilation. It keeps flies out and worms cannot escape. Although some rainwater may get in. The worm farm only comes in black which absorbs heat quickly.

The trays are large and bulky which makes them difficult to lift. The legs are not very strong and become unstable under the weight.

The liquid collection tray is fairly big which improves airflow to the bottom tray. The other benefit is you do not need to collect the worm farm leachate or worm tea very frequently. There’s also a handy worm mound so that your worms can climb back up into the bottom tray.

The Can O Worms is a good starter worm farm, and it’s height makes it ideal for kids.

For more information, read our in-depth Can O Worms review.

The Worm Cafe is a 3 tier stackable worm farm, made from recycled plastic. Even though it is made from plastic, the worm farm is quite sturdy. There are 3 large trays with air ventilation holes on the sides.

It has a similar design to the Can-O-Worms worm composter except that it is rectangular in shape. The lid is hinged which makes it easier to feed the worms. Instructions are also engraved on it’s underside of the lid.

The liquid collection tray is fairly large, with a worm mound so that worms can climb back into the bottom tray.

The Hungry Bin lives up to it’s name as an efficient food processor. It’s innovative flow-through patented design makes it super easy to maintain. This large worm composter is one of the best productivity wise, but it comes at a high price.

The top of the bin has a larger surface area and the lid has lots of air holes for ventilation. However airflow can be a problem due to the scale of the Hungry Bin. The structure of the bin is sturdy and you can move it around on wheels. There’s a drip tray which sits underneath the bottom in the open.

The Chef’s Star worm farm is stackable 3 tray worm farm made from durable terracotta polyethylene. The design is compact and doesn’t take up a lot of space.

The worm composter is quick and easy to assemble. The lid comes with a useful handle and it has some some air holes for ventilation. The spigot drains any excess liquid for easy worm tea collection.

A feedback theme is the instructions are incomplete.

Conclusion: Our Top Picks per Category for the Best Worm Composter

Please leave a comment below with your own thoughts on the best worm composter.