A good worm bin should smell earthy. If your worm bin smells rotten and vinegary, then worm bin acidity may likely be too high. Nutrients become unavailable to plants when the soil is too acidic. Just like plants, compost worms and microorganisms thrive under the same acidic conditions as plants.

A toxic worm farm can lead to several worm farm problems including:

In this article, we will look at the science behind what causes an acidic worm farm, and some ways to fix it.

A logarithmic scale is used to measure acidity. It is called pH (power of Hydrogen) and it starts from 0 (acidic) to 14 (base or alkaline), where 7 is neutral. For example, lemon juice is at pH 2, pure water is neutral and seawater is at pH 8.

Worms work best in neutral soil. A good pH level for a worm farm is between 6 and 7. However most species of composting worms and quite tolerant of acidic conditions.

You might want to check out this comprehensive “goto” guide on common worm farm problems and how to fix them.

There are 2 main causes of an acidic worm bin: 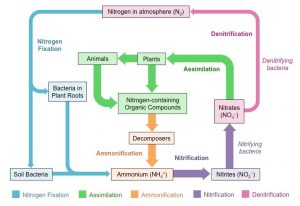 Most of the chemical processes which deal with ammonia also produce hydrogen ions. If you overfeed your worms, any excess food will begin to rot and decompose; which generates more ammonia.

Here are some ways to reduce acidity (raise the pH) in the worm bin:

Calcium carbonate is a base which reacts with acids and becomes carbon dioxide and water. Carbonate is the key player in neutralizing acid. It’s always a good idea to have a bag of crushed agriculture lime on hand. Do not use hydrated lime as this can harm and kill your worms.

Some people bake eggshells in the over prior to adding in the worm bin to remove any pathogens that may be present. I don’t worry about this. You can also pulverize or crush the eggshells into bits that are small enough for your worms to ingest. Eggshells are also a rich source of calcium and give grit to worms which helps them digest other foods.

If your worm bin is too moist, it can become anaerobic (meaning no oxygen). Anaerobic decomposition produces hydrogen sulfide gas which smells like rotten eggs. In wet conditions, ammonia acts as basic or alkaline solution (raising pH).

A nutrient is a substance used by an organism to survive, grow, and reproduce. Protein is one of the three macro-nutrients, along with fat and carbohydrate. Protein poisoning is an acute form of malnutrition, believed to be caused by a near complete absence of fat in the diet. Early American explorers that survived solely on lean meat, such as rabbits, sometimes developed medical problems which resembled starvation.

There are mixed opinions on what is happening to the worms when too much protein is consumed. However, a popular hypothesis is that sometimes too much acidic food passes into the worms intestines, which ruptures due to a pressure build up from fermented gasses. The worms digestive tract consists of pharynx, the esophagus, the crop, the intestine and then the gizzard. Normally, acidic foods are neutralized before it reaches the worms intestines by calciferous glands which excrete calcium carbonate. When a worm is afflicted by protein poisoning they sometimes have bloated segments alternating with squeezed or narrowed sections in between – hence the nickname String-of-Pearls.

How to Measure pH

You can use a pH meter to measure acidity in a worm bin. There are also ph test strips available. Make sure you take a few readings in different spots to get a more accurate measure.

If you don’t have a meter, you can apply the smell test. Does your bin smell wet, musty, rotten or mildewy? If so, you very likely might have pH issues. However a foul odors does not necessarily mean you have a pH issue. It can also be caused by excessive moist conditions.

2 thoughts on “How to Manage Worm Bin Acidity (pH)”