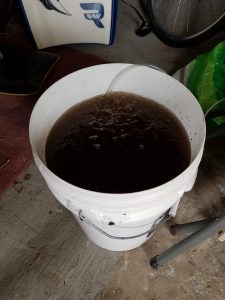 Worm tea equals pure liquid gold. Also referred to as worm juice and worm wee. There’s no doubt worm juice makes an excellent plant fertilizer. It is also a natural insect repellent and improves soil health. Worm wee is far superior to chemical fertilizers. Chemical fertilizers contain pesticides and herbicides, burn the soil and kill beneficial microbes. Worm tea is free and easy to make at home. All you need is a couple handfuls of worm casting and a bucket of water. It’s a great way to boost your garden.

Worm compost tea is your secret ingredient to grow giant vegetables! The key to plant growth is nitrogen. About 78% of all nitrogen exists in the atmosphere. Unfortunately plants cannot absorb atmospheric nitrogen. Nitrogen must convert

into other forms so that it can enter the food chain. Worm tea contains a higher count of good bacteria. Bacteria puts nitrogen back to the soil; making it available for plants to absorb.

Manure and worm castings are slow to release nutrients. Liquid fertilizer makes nutrients immediately available for plants to absorb. Worm juice can give plants an instant boost that is quicker than applying worm castings.

How to Make Worm Compost Tea

Worm tea boosts microbiological activity in soil by adding bacteria. Try to avoid chlorinated water as this can kill off some of the beneficial bacteria.

There are a two ways to obtain worm compost tea:

Are you thinking about starting a worm farm? This guide will teach you everything you need to know about how to start a worm farm.

Leachate is liquid run off at the bottom of your worm bin. Worm tea requires human intervention to steep worm castings in water.  Not all bacteria in the bin are good. When conditions are not right, bad bacteria will outnumber the good. This can cause harmful toxins and pathogens to be present in leachate (also known as worm wee). Leachate can be acidic, anaerobic, and lacking in the beneficial microbes. So be cautious with worm farm leachate.

Worm castings on the other hand are a finished product. Conditions are much more stable to use as a base for making a worm casting liquid fertilizer.

What you will need:

Adding a continuous supply of oxygen will significantly increase the number of good microbes in the worm casting tea. In order to oxygenate worm farm tea at home, you’ll need a fish tank air pump and some accessories. Accessories include an air stone, return valve and some tubing. This should cost you less than $20USD total to buy. Once the mixture is ready to brew, drop the air stone into the bucket and let it bubble overnight.

How To Harvest Worm Tea

Don’t be shy to cover whole plants including leaves with worm tea. It is a natural insect repellent and helps to fight harmful diseases (like black rot, mildew etc…). I like to scoop the liquid fertilizer into a cup and pour over the plants. You can also use a watering can or a spray bottle. If you use a spray bottle, remember to strain the mixture first. Otherwise small clumps might build up and block the nozzle.

What is Worm Wee?

It’s not urine. Worm wee is another name for worm farm leachate which is the excess liquid run off collected in the bottom of a worm bin.

One thought on “What Is Worm Tea and Why Do Plants Love It?”